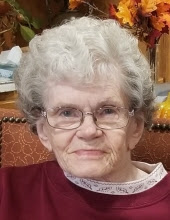 Loretta Vokaty, age 91, of Cresco, passed away on Monday, February 7, 2022 surrounded by her family at the Evans Memorial Home in Cresco, Iowa.

Loretta Mae was born on March 21, 1930 to Jacob L. and Stella (Hrdina) Vopava in Protivin, Iowa. She attended school in Spillville, Iowa and later graduated from Ridgeway High School.

On November 16, 1949 she married Raymond Vokaty in Lourdes, Iowa. To this union two children were born.

During her working career Loretta was a secretary at REC and was the bookkeeper for Ray’s Body Shop.

Loretta enjoyed spending time in her flower garden, tending to her marigolds and petunias. She shared her love for flowers while being a member of the Garden Club at the Evans Home. She was also a member of the American Legion Auxiliary and the VFW Auxiliary. She loved sports, and was an Iowa Hawkeye and Chicago White Sox fan. Loretta looked forward to the Howard County Fair each year, specifically the bingo stand. She spent the majority of each day during the fair playing bingo. She also enjoyed many local bus trips to Red Wing and Tama, where she could play bingo and do a little gambling. Loretta had an extensive collection of cardinals and Avon items. She made the best Thanksgiving dressing, chicken noodle soup and beef stew.

Her true love was her family. She enjoyed attending all the events in the lives of her grandchildren and great-grandchildren. Whether it be sporting events, music concerts or dance recitals, she was there.

She was preceded in death by her parents, husband, Ray, daughter, Carmen Heying and a sister Leona Hageman.

The family wishes to express their sincere thanks to all the staff at the Evans Memorial Home for the love and care that Loretta received during her stay.