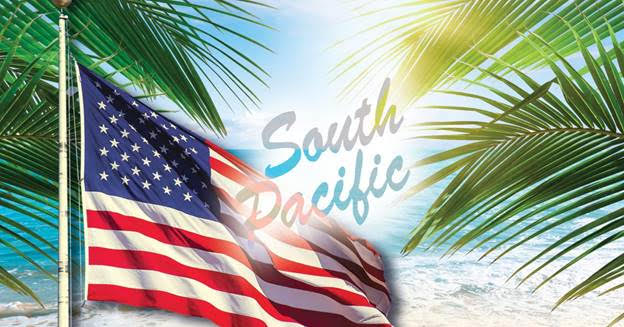 NIACC presents South Pacific at the North Iowa Community Auditorium on the NIACC campus at 7:00 p.m. on Wednesday, February 16th, 2022. This presentation is part of the 2021-2022 Performing Arts and Leadership Series.

Set on a tropical island during World War II, this timeless Rodgers & Hammerstein classic features some of the most beautiful music ever composed, woven into an inspiring story cherished the world over. Winner of ten Tony Awards, the beloved score’s songs include “Some Enchanted Evening,” “I’m Gonna Wash That Man Right Outa My Hair,” and “There is Nothing Like A Dame,” amidst big Broadway performances and a chorus of American sailors and Navy nurses ready to transport you to Bali Ha’i.

Led by President and Executive Producer Daniel Sher, Big League is celebrating its 30th season of producing and general managing Broadway shows and attractions throughout the world. Highlights were collaborations with Disney on Elton John and Tim Rice’s Aida (North America, Taiwan, and China) and with Cameron Mackintosh on a new production of Miss Saigon. Also, US tours of the Tony®-Award winning Broadway revival of 42nd Street and Susan Stroman’s Broadway production of Meredith Willson’s The Music Man. Others: Footloose (Las Vegas, USA), Titanic, 1776, Peter Pan, A Funny Thing Happened on the Way to the Forum starring Rip Taylor, Blast!, The Who’s Tommy (North America, South America, Europe, and Japan), Ain’t Misbehavin’ with Ruben Studdard, and the First National Tour of Chitty Chitty Bang Bang – flying car and all. More recent: The Producers (Susan Stroman’s original work), Hello, Dolly! with Sally Struthers, Guys and Dolls, My Fair Lady (US Tour and China premiere), original hip-hop dance show Groovaloo (Off-Broadway), Dr. Seuss’ How the Grinch Stole Christmas! The Musical (10 USA tours, Grand Ole Opry, and Madison Square Garden), Dreamgirls (US, China premiere, Japan), Hair (US and Japan), Bring it On (US and Japan), and Legally Blonde (US, China premiere, Singapore). In 2018-19, A Chorus Line toured the USA and Japan before performing for the first time ever in China in 2019. In the post-pandemic 2021-22 season, Big League will remount its acclaimed tour of An American in Paris, premiere its new production of South Pacific, and tour its flagship production of A Christmas Story, The Musical for a seventh holiday season. Future tours include Legally Blonde, Memphis and The Cher Show.

To learn more about the show, visit www.southpacificnationaltour.com.