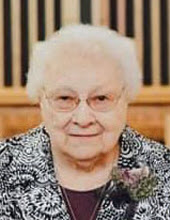 Marie A. Formanek, 91, of Garner passed away Monday, February 7, 2022, at Hancock County Memorial Hospital in Britt.

A funeral mass will be held at 10:30 a.m., Monday, February 14, 2022, at St. Wenceslaus Catholic Church in Duncan with Rev. Fr. Andrew Marr officiating. Burial will be in the church cemetery.

Visitation will be from 2:00 to 4:00 p.m., Sunday at St. Wenceslaus Catholic Church with a rosary at 1:30 p.m. followed by a Scriptural wake service. Visitation will resume one hour prior to services at the church on Monday.

Marie Ann Formanek, the daughter of John and Rose (Paca) Jakoubek, was born June 20, 1930, on a farm northwest of Garner. She graduated from Hayfield High School in 1947. On November 15, 1949, she was married to Leonard Formanek at St. Wenceslaus Catholic Church in Duncan. They farmed south of Hayfield where they raised their sons. After Leonard passed away in 1997, she continued to live on the farm until 2008 when she moved into Garner. She enjoyed spending time with her family, cooking, baking, working puzzles, watching sports on TV and listening to games on the radio.