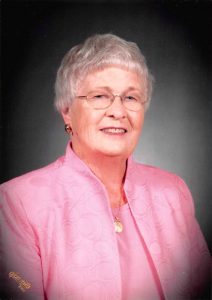 She was born to parents Tieman “Tim” and Lisetta “Dot” Graves Dudden on May 16, 1932, in Grundy Center and graduated from Grundy Center Community High School in 1950. Donna and Leonard Ralston were married on September 9, 1951; they lived in Grundy Center except while Leonard was stationed in Cheyenne, WY serving in the U.S. Air Force in 1952-1955.

Donna was a lifelong member of the Bethany Presbyterian Church and a member of Mariners and Woman’s Club of Grundy Center. While her first love was her husband and family, she thoroughly enjoyed music- playing the piano, singing in the church choir, and frequently singing for weddings and funerals. She and Leonard also belonged to the Town and County Golf Course.

A service will be held at a later date. Memorials may be directed to 2815 N. 202 Street, Elkhorn, NE 68022 which will be designated by the family at that time. For further information or to leave an online condolence please visit www.abelsfuenralhomes.com.

The family is very grateful and blessed by the many relatives and friends who supported her, especially during the past several months.