Iowa has won four of the last five contests against Maryland, dating back to 2020.

Iowa’s 110 points are the most scored by either team in the 14-game series history and most by the Hawkeyes in a Big Ten game since scoring 116 against Northwestern on Feb. 9, 1995.

Tonight’s victory was Iowa’s fourth away from Iowa City, including its third in a true road game.

Bohannon’s 10 triples are an Xfinity Center record and ties for second most by a player in Big Ten history. Bohannon’s previous high was eight 3-pointers (at Maryland in 2017 and vs Nebraska in 2021). Bohannon’s 3-point totals tonight moved the sixth-year senior into 12th place all-time in the NCAA Division I.

Iowa is the first team in Big Ten history to have one player make 10 3s (Jordan Bohannon) and another player score 30 points (Keegan Murray) in a single game.

Iowa made 18 3-pointers are the most by the Hawkeyes in a Big Ten in program history, surpassing 16 made triples against the Terrapins on Feb. 25, 2017.

Jordan Bohannon’s second 3-pointer of the first half moved him past Aaron White (2012-15) for third place in Iowa career scoring. Bohannon’s 30 points tonight raise his career scoring total to 1,884 points.

Iowa outrebounded Maryland, 37-28, improving to 13-0 when outrebounding its opponent this season.

Iowa had a game-best 18-0 run early in the second half, marking the 17th time in 23 games this season recording a scoring run of 10-0 or better.

Iowa (16-7, 6-6) returns home on Sunday to host Nebraska (7-17, 1-12). Tipoff is scheduled for 1:01 p.m. (CT) on Mediacom Court at Carver-Hawkeye Arena in Iowa City. Tickets are available for purchase at hawkeyesports.com/tickets. 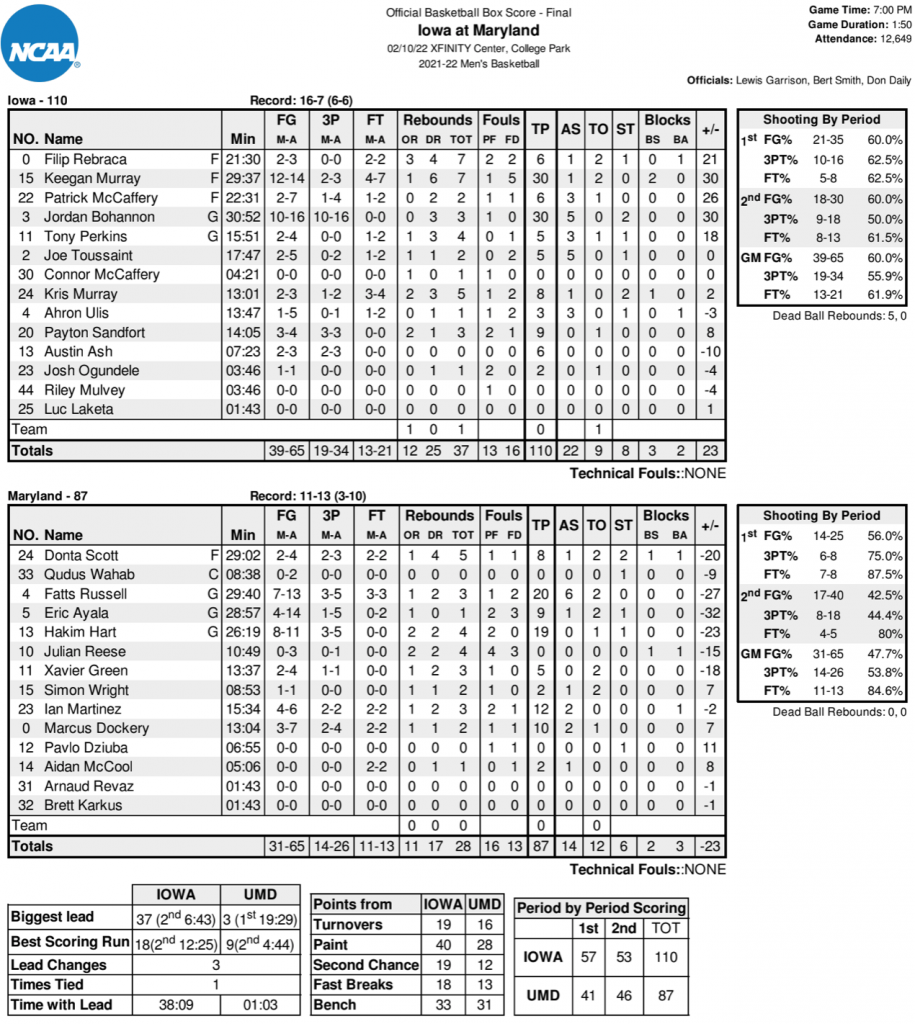