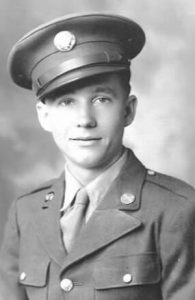 Memorials can be made in Raymond’s name to Beyond The Still, a non-profit out of Bancroft, Iowa, helping Veterans groups.

Raymond Baade was born April 4, 1926, in rural Wesley, Iowa, to Dick and Marie (Plaisier) Baade. He attended schools in German Township. Raymond was baptized at the Immanuel Lutheran Church in rural Titonka and was confirmed at the Good Hope Lutheran Church in Titonka.

He served two years in the United States Army, in the Pacific Theater during World War II.

On June 2, 1949, Raymond was united in marriage to Thresa Spear and became a member of the Ramsey Reformed Church. He served as a Deacon, Elder, Sunday School teacher and various other committees. He was also a board member of the Titonka Care Center for years.

Raymond worked for Kossuth County from 1947 until his retirement in 1989. For the next eight years he and his wife, Thresa worked for Winnebago Industries, delivering motorhomes.

Raymond died Wednesday, January 26, 2022, at the Hancock County Memorial Hospital in Britt. He was 95.