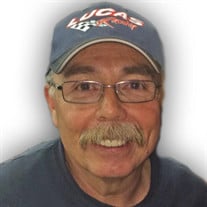 Visitation will be held one hour prior to the Celebration from 12:00pm to 1:00pm at Bride Colonial Chapel.

Clarence was born on March 12, 1954, the son of Louis and Margaret (Funk) Mayo of Chicago, IL. Clarence grew up in the Chicago area before the family moved to Manly where he attended North Central High School. On April 6, 1974, Clarence married Denise Marie Dahl, from this loving union, one son was born. A majority of his life was spent working as a mechanic either for himself at Mayo’s Custom Garage Floors or at Schukei Motor Company. He loved spending time working on vehicles and getting prepared for drag race season.

Really all things motor sports he had a passion for, and had just recently got into snowmobiling. Clarence was a talented cook, the family is going to miss some of his Mexican Cuisine. He enjoyed his food spicier than others. Clarence and Denise often took vacations either on a cruise or traveling to somewhere they could sight see. He really loved his family unconditionally and cared for others when they needed it most.

Preceding him in death are his wife of 46 years, Denise; father, Louis Mayo; brother, Earl Mayo; parents-in-law, Maynard and Rosemary; and a sister-in-law, Diane Dahl.