The Panthers have now won three consecutive games since the turn of the calendar to jump into third place in the conference standings with a 3-1 league record.
Missouri State led by as many as 11 points midway through the first half on the backs of 6 made three-point field goals in the opening frame, as well as 16 points by Isiaih Mosley. UNI closed the opening stanza on a 13-4 run in the final 6 minutes, with Austin Phyfe and Trae Berhow each scoring 4 points to send the Panthers into the locker room trailing 34-33 at halftime.

The Bears controlled much of the early second period before the Panthers began to chip away from inside the paint and in fast break transitions. UNI and Missouri State would exchange control of the lead 7 times in the second half as AJ Green posted an impressive 29 points in the final 20 minutes. The Panthers were able to draw contact and attempt 22 free throws in the second half, converting on 20.

With the game tied at 76 with 1:33 to go in regulation, Green sank three free throws after being fouled from beyond the arc to give the Panthers a one possession advantage. Bowen Born and Green would combine to make four additional shots from the charity stripe down the final stretch, holding off a late Missouri State rally for the one-point victory.

Green finished the night with 33 points for UNI, including a career-high 13 points at the free throw line. Noah Carter recorded his fourth conference game this season with at least 15 points in a 16-point performance, while Born posted a season-high 11 points. Trae Berhow scored 9 points to complement a team-high 8 rebounds.

PANTHER NOTES
With UNI’s win, head coach Ben Jacobson ties former Creighton/Saint Louis coach Eddie Hickman for third in MVC history with 163 wins in league play. Henry P. Iba (Oklahoma State) leads the list with 187 victories in conference play, while former Creighton coach Dana Altman is second with 182.
UNI has won 7 of the last 8 matchups against the Bears. The one-point margin of victory for the Panthers was the closest against Missouri State since UNI defeated the Bears on Jan. 13, 2012 in Springfield.
UNI committed a season-low 4 turnovers in Saturday’s win over Missouri State. It is also the fewest turnovers the Panthers have committed in a game since also recording four against Evansville in the first round of the 2018 MVC Tournament.
The Panthers are 5-0 this season when shooting 50% or better from the field. Saturday’s game at Missouri State also marked the 3rd straight game UNI has made over half of their field goal attempts.
Since the opening of JQH Arena in 2008, the Panthers are 10-2 playing at Missouri State’s home arena.
AJ Green’s 33-point effort marked his 3rd game of 30+ points this season, and 5th of his career.
AJ Green surpassed Robbie Sieverding (1998-02) for 9th on the program’s all-time scoring list with 1,432 career points.
Trae Berhow jumped to 35th on UNI’s all-time scoring list with his 1,046th point on Saturday night.
Austin Phyfe is 62 points from passing his father Steve Phyfe on the program’s all-time scoring list. Phyfe tied Ray Storck (1979-83) for 62nd with 851 career points at UNI.
Noah Carter is 6 points from joining the top 100 list all-time in scoring in program history. Carter sits with 574 career points after a 16-point game at Missouri State.


UP NEXT
The Panthers return to action on Jan. 11 to host the Indiana State Sycamores. Tip-off is scheduled for 7 p.m. at the McLeod Center. 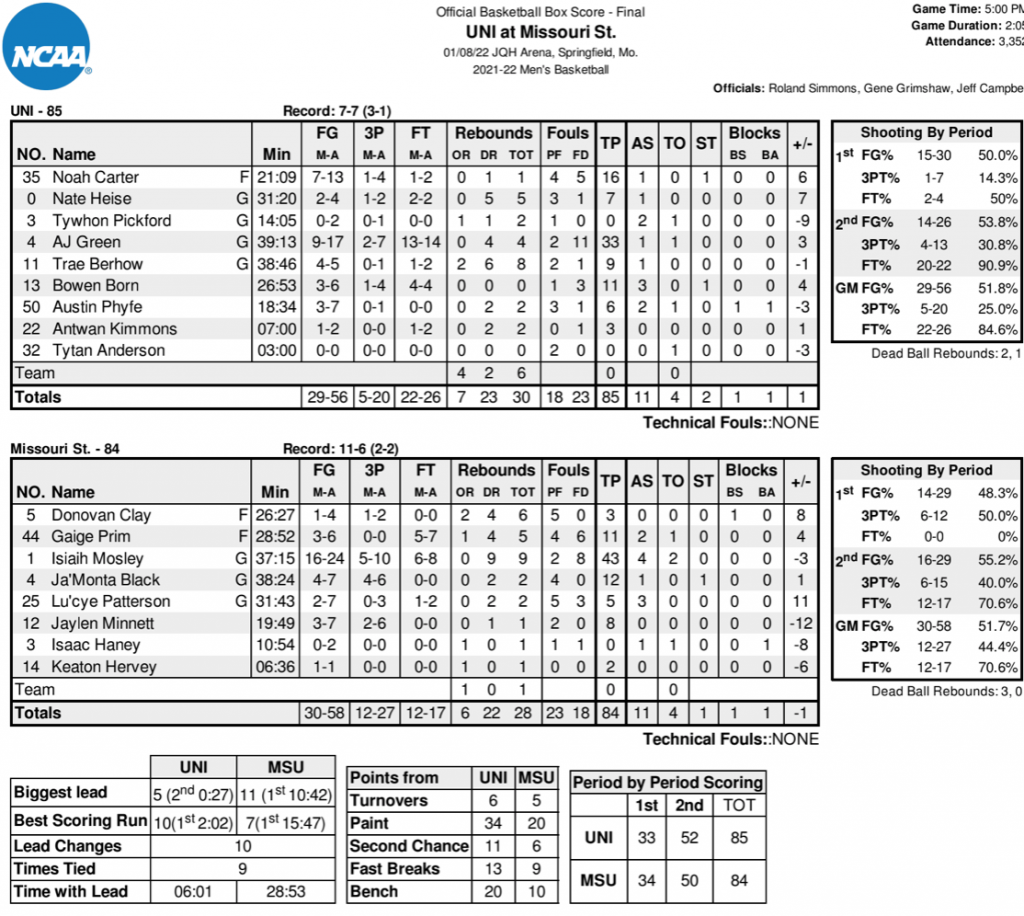