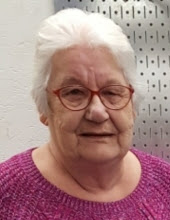 Sharon Kay McIntyre, age 78, of Decorah, Iowa, passed away on Thursday, December 16, 2021 at the Evans Memorial Home in Cresco, Iowa after a short battle with cancer.

Sharon was born on September 10, 1943 in Cresco to Sam & Sarah (Kerst) Lucas. She was baptized on July 15, 1946 and confirmed on May 18, 1958 at the Immanuel Lutheran Church in Cresco. She attended Cresco Schools. Sharon married Doug A. McIntyre on July 28, 1962 in Harmony, Minnesota. To this union four children were born; Doug G., Donny, Jeff and Lisa. Over the years, Sharon was blessed to be home raising her family and taking care of the house.

She enjoyed fishing, playing cards, listening to country music, putting puzzles together, word searches, crocheting, and watching the Green Bay Packers. Most importantly, she loved spending time with her children and grandchildren.