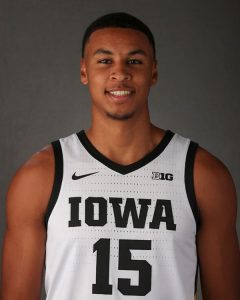 IOWA CITY – University of Iowa men’s basketball sophomore Keegan Murray has been named Big Ten Player of the Week, it was announced Monday by the Big Ten Conference Office.

Murray has earned the Big Ten weekly honor three times (Nov. 22; Dec. 20; Jan. 3) this season, including twice in the past three weeks.

Murray (6-foot-8, 225 pounds) posted game bests in points (29), rebounds (10), and blocks (3), while also dishing out three assists in Iowa’s 92-71 win over Western Illinois on Dec. 29, in Iowa City. The native of Cedar Rapids, Iowa, registered his third double-double of the season and shot a blistering 65 percent from the field, making 13-of-20 attempts.

Murray, who is tops in the country in points per game (23.7), has netted 25+ points six times this season.