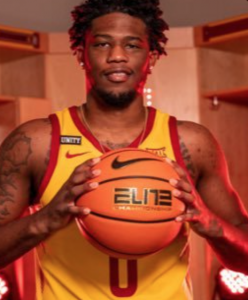 AMES – Iowa State men’s head basketball coach T.J. Otzelberger has announced the addition of Georgetown transfer Tre King. King is a 6-7 forward out of Lexington, Kentucky, who spent the previous three seasons at Eastern Kentucky before transferring to Georgetown. King, a senior, never played a game at Georgetown and has two years of eligibility remaining due to the COVID year.

King played in 28 games for Eastern Kentucky last season and averaged 14.9 points and 6.2 rebounds while shooting nearly 50 percent from the field to earn All-OVC first-team honors. He has shown the ability to step out and knock down perimeter shots, connecting on 19 3-pointers at a 34 percent clip. Defensively, King was one of three players nationally with at least 30 blocks and 40 steals in 2020-21.

“Tre will provide an immediate impact to our program with the combination of his character, versatility and experience,” Otzelberger said. “He has the unique ability to shoot the three, make plays attacking closeouts, as well as finish through contact at the rim. Defensively, he can guard multiple positions and be an impactful rebounder. We’re excited to have Tre enhance the competition of our practice environment each day.”

King, who prepped at Hargrave Military Academy, reached double figures in 21 games during last season’s shortened campaign. He scored a season-high 29 points against Tennessee Tech, while also scoring 25 against Xavier. In total, he posted six 20-point games and five double-doubles.