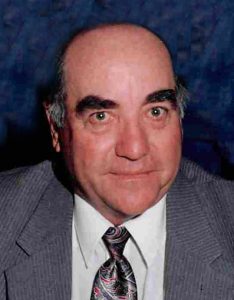 Philip Eugene Eischen was born July 23, 1929, on the family farm near St. Benedict, son of Alex and Anna (Bormann) Eischen. He attended school at St. Benedict Catholic School. Phil was united in marriage on June 5, 1951, to Ruth Muller at St. Michael’s Catholic Church in Whittemore. Together they raised their family on the farm near Whittemore.

Phil farmed until 1972 and then became co-owner of Muller-Eischen Equipment operating until 1996 when he began working for Red Power. In 1999, Phil worked with his son at Eischen Sales retiring in 2007. In 2007, he started Eischen Sausage Haus operating it until 2012.

Phil loved to fish. He enjoyed going to his cabin in Devil Rapids, Canada for 41 years, as well as Lake of the Woods. He also enjoyed playing cards whenever possible, hunting, gardening, and traveling, and he loved to cook. Phil was very proud of his Luxembourg heritage and was always ready to share stories and memories of times past.

Phil was devoted to his church and his community. He was a member of St. Michael’s Catholic Church active in Holy Name Society, he was a 40-year member of the Knights of Columbus and also a 4th Degree member of the Knights of Columbus. Phil served on the Kossuth County Fair Board serving as head cook for the Fair BBQ for 25 years and also served on the Iowa Equipment Dealer Association Board.

He was preceded in death by his parents; his wife Ruth on April 7, 2015; 4 infant children; a son-in-law, Michael O’Keefe; two brothers, Marvin and Robert Eischen; and a sister, Verna Pfeffer.