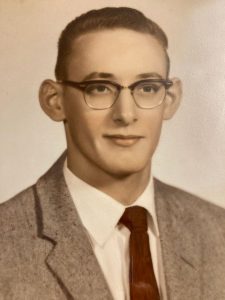 Richard Allen Fritz was born April 11, 1943, to William Fritz and Wilma (Gerdes) Fritz in Mason City, Iowa. He was raised on the family farm in rural Titonka, Iowa. Richard attended Titonka Consolidated School and graduated May 1961. While growing up, Richard was active in 4-H and FFA. His projects primarily revolved around raising and showing sheep at county fairs and the Iowa State Fair. Richard helped his dad raise purebred Hampshire and Columbia sheep. He was instrumental in grooming and showing these sheep at the North Iowa Fair, Iowa State Fair, and Clay County Fair. He enlisted in the Army National Guard in 1963. Richard returned home and began farming on his own and raising purebred sheep and hogs. He eventually returned to the home place to farm for his parents. He worked at Winnebago Industries for about ten years. Richard enjoyed riding snowmobiles and his motorcycle. His nieces and nephews always liked to go to Uncle Richard’s to ride snowmobiles. Sometimes the snowmobiles worked and sometimes they did not!

We, his family, give thanks to the many friends and neighbors who helped Richard by getting groceries and medicines for him when he became unable to drive. Visitation for family and friends will take place at Oakcrest Funeral Services in Titonka from 2 to 4 pm on April 10, 2022. Family graveside service will be held on Monday, April 11, 2022, Richard’s birthday.