AMES – No. 14 Iowa State (8-1) got back on the winning track, taking down Longwood (3-5) 94-56 Sunday afternoon at Hilton Coliseum. The visiting Lancers were briefly able to respond to ISU’s early lead, but a big run to close out the first quarter gave the home Cyclones a double-figure lead. The lead would get to as much as 41 during the contest, as Iowa State began its five-game homestand with an eighth win on the season.

Iowa State had five in double figures, with both Joens sisters recording double-doubles. Aubrey Joens set a new career-high with 24 points on 8-of-13 shooting, including six 3-pointers while grabbing a career-best 14 rebounds for her second career double-double. Ashley Joens, in the 100th game of her ISU career, got 16 points and 12 rebounds.

Emily Ryan tied her season-best with 13 points, while also dishing out five assists and grabbing four steals. Lexi Donarski also notched 13 points (her fourth-straight game in double figures), while Beatriz Jordão had one of her best days as a Cyclone, finishing with a season-best 14 points and tying her career-high with four blocks.

The Cyclones got ahead 9-2, but the Lancers were able to get back into it, going on an 8-0 run to take a brief lead at 10-9. The ISU path to restoring the lead came at the free throw line, draining five free throws during a 12-0 run that put the Cyclones ahead by double figures at 21-10. The ISU defense forced six Longwood turnovers in the first quarter, with Emily Ryan going coast-to-coast for a pair of lay-ins on her own steals.

Aubrey Joens’ corner 3-pointer started a 9-0 run that saw the Cyclones up their lead to 18 at 36-18. Longwood was kept off the board for a stretch of over three minutes in the second period, as the Cyclones forced another six Lancer turnovers in the quarter and committing only one foul in the first half, as ISU took a 23-point advantage to the locker room.

The Cyclone offense was the star of the third quarter, as the Cyclones put up 29 points on 11-of-16 shooting in the period. Lexi Donarski got nine points, including a lay-in as time expired, while Beatriz Jordão contributed eight points in the quarter, with the Cyclones taking a 38-point advantage into the fourth quarter.

With the win in the bag, ISU shuffled the deck throughout the final period, getting Maggie Espenmiller-McGraw some extended minutes in her first action of the season. The Indianola native got her first bucket of the season with a corner 3-pointer in the first minute of the fourth and would finish the game with six points and a rebound in seven minutes of action.

Aubrey Joens continued her run of good form, notching her second career double-double with a game and career-high 24 points on 8-of-13 shooting, including six 3-pointers. She also grabbed a career-best 14 rebounds in the win.

In her 100th game as a Cyclone, Ashley Joens got career double-double number 35, posting 16 points and 12 rebounds.

Emily Ryan was key to an ISU defensive effort that saw the Cyclones force 18 turnovers. The sophomore posted four steals to help the Cyclones finish with a season-best 32 points off turnovers. Ryan matched her season-high with 13 points and dished out five assists.

Iowa State is back in Hilton Coliseum on Wednesday for the annual Iowa Corn Cy-Hawk Series meeting with Iowa. Tip between the Cyclones and Hawkeyes will be at 6 p.m., with ESPNU televising the contest. 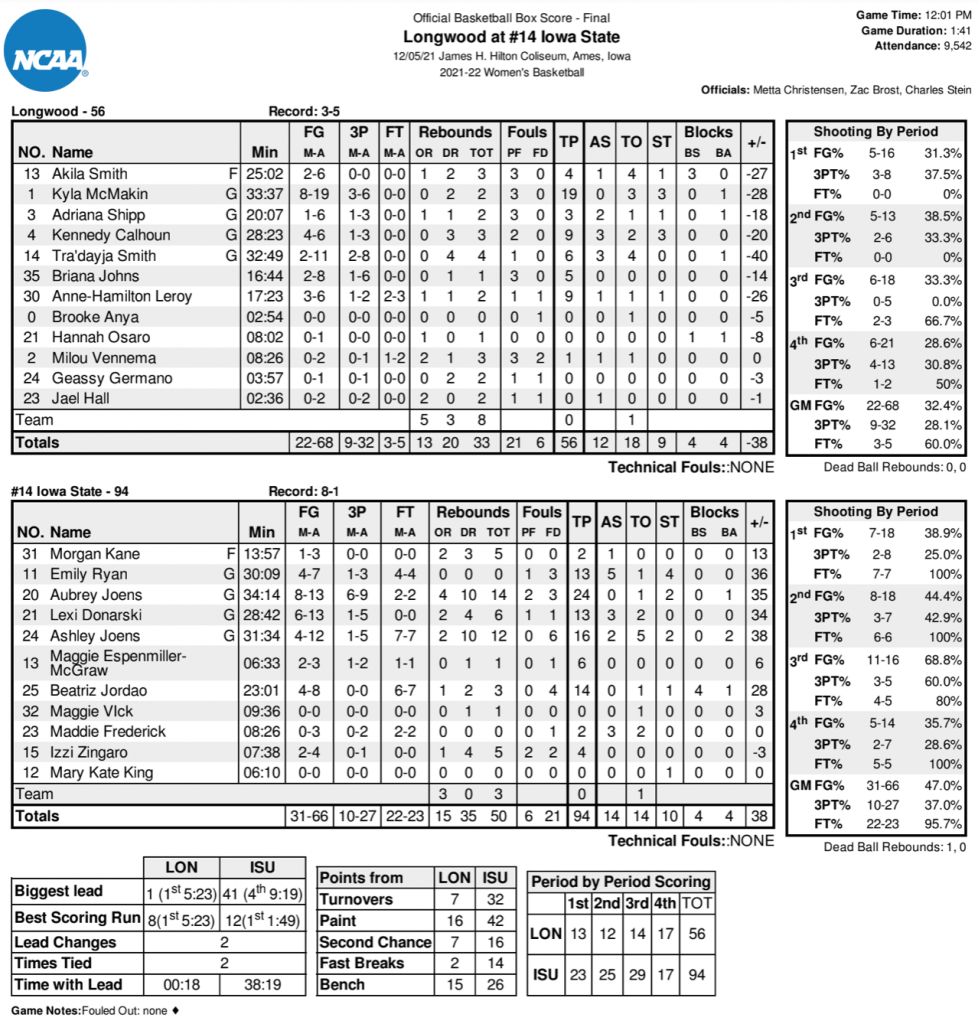