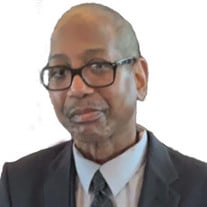 Jesse Parker, Jr., 64, of Marshalltown and formerly of Mason City died Sunday, November 28, 2021 at his home in Marshalltown.

The only son of Jesse and Vergie (Stringfellow) Parker, Jesse Jr. was born in Mason City on March 21, 1957. He grew up alongside his older sisters, Lucinda and Sandra, and graduated from Mason City High School before enrolling at Hamilton Business College.

While in college Jesse met LuAnn Lechnir and together they were blessed with many years together and raised five children, Jason, Tavar, Cameo, Jordan, and Isaiah.

While living in Mason City Jesse was the general manager at Perkins Restaurant for several years, he then went on to live in Marshalltown where he was employed with JBS for over twenty years.

Family was everything to Jesse. He was faithfully raised in a Baptist home and kept his faith throughout his entire life. Many will remember Jesse for his strong work ethic and devotion to his children, raising them as a single parent for many years.

In his free time Jesse loved watching football and especially enjoyed cheering on the Pittsburg Steelers and the Kansas City Chiefs.

Those grateful in sharing in his life are his children, Tavar and Courtney, Cameo, and Jordan; grandchildren, Keanu, Jersie, Zaylea, and an expected grandchild on the way; nieces, Samantha, Shedida, Shawna, Serenity, Shymari, and Datasia; nephews, Bryce, Jonathan, Terrance, Devon, Vontis, and Samir; and many extended family members and friends.

Jesse is joined in Heaven by his parents; sons, Jason and Isaiah; sisters, Lucinda, and Sandra; nephew, Desmond Parker; and mother of his children, LuAnn Lechnir.