Competing with a limited roster, the Cyclones made the most of their opportunities, shooting 47.1 percent from the field and connecting on a season-high 18 triples to rout PSU.
Iowa State competed for the first 33 minutes of action with just six players with Emily Ryan (9), Ashley Joens (13), Aubrey Joens (21), Morgan Kane (11), Beatriz Jordão (13) and Lexi Donarski (12) giving the Cyclones a 73-43 lead before the ISU bench was emptied. All 10 Cyclones who saw action would score, as Iowa State completed the rout of PSU.

How It Happened
The Cyclones started out hot in the first quarter yet again, spurred by six triples in the first quarter alone. The Cyclones closed the opening quarter with 12-0 run, as Aubrey Joens, Donarski, and Ashley Joens combined on four 3-pointers to take an early 24-10 lead over Penn State. Iowa State shot 53.3 percent from the field and held Penn State to 4-of-18 shooting in the opening 10 minutes.

Iowa State could not be stopped from long range, as they made it rain with 10 first half 3-pointers. Iowa State’s hot shooting and balanced offense helped Iowa State cruise to a 17-point halftime lead against PSU. Leading the Cyclones at the half was Aubrey Joens and Ashley Joens with nine points apiece. Jordão was efficient with eight points off the bench off 4-of-4 shooting.

The Cyclones kept their foot on the gas in the third quarter, outscoring Penn State 20-11 to grow the Iowa State lead to 26 entering the final stanza. With a 30-point lead shortly into the fourth quarter, ISU sent its starters to the bench. The Cyclone offense continued to click nonetheless, closing out the game with a 38-point win over PSU. The Cyclones also connected on 18 triples, one 3-pointer shy of tying the school record of 19.

Players of Note
Beatriz Jordão tallied a season-high 13 points of 6-of-8 shooting and grabbed four rebounds off the bench.

Aubrey Joens collected her first career double-double, tying her career high in points (21) and setting a career-high in rebounds (11).

Emily Ryan tallied nine points, 10 assists and five boards as she managed the ISU offense. Her 10 assists marked her second double-figure assist game of the season and the fourth of her career.

Up Next
Iowa State will take on UMass in the Gulf Coast Showcase championship game on Sunday, Nov. 28 at 6:30 p.m. All the games will be streamed on FloHoops. 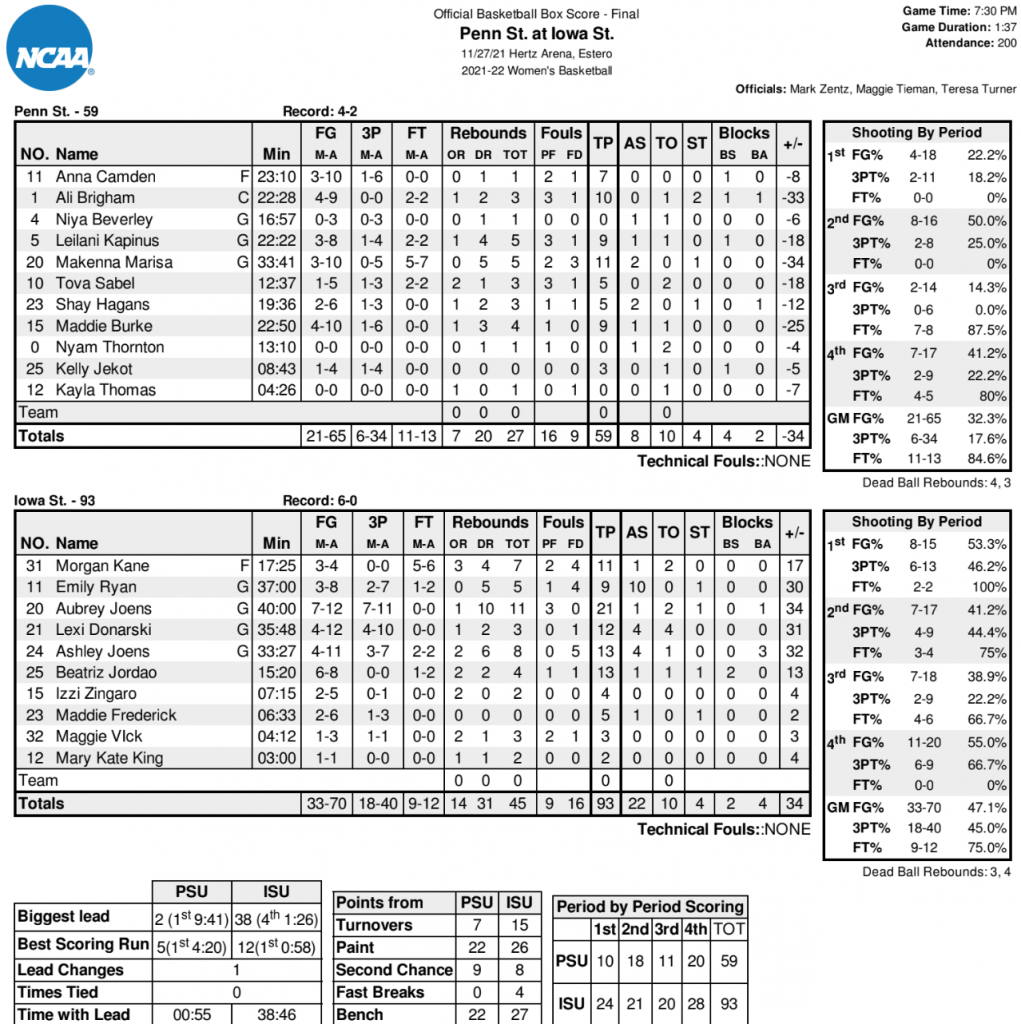