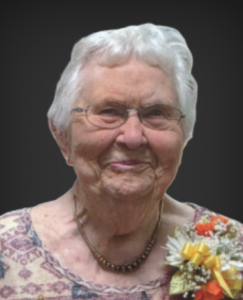 Neoma Jean Isebrand, daughter of Kenneth and Carrie (Skilbred) Holland, was born on July 18, 1929 on a farm south of Woden, Iowa. She passed away at Avera Holy Family Hospital in Estherville, Iowa on November 14, 2021 at age 92.

Neoma graduated from Buffalo Center High School and then attended one year of business school in Mason City. She was united in marriage to Virgil Isebrand on January 9, 1948 at Grant Lutheran Church in rural Woden. After their marriage the couple lived in Woden, where Neoma raised their family. In 1973, they moved to Fenton, Iowa and operated the Polar Bear Lounge and Neoma’s Café. The couple then moved to Wayne, Nebraska and operated a poultry farm. They moved to Estherville in 1995, where she was employed at Hardees for 19 years.

Neoma was a member of Estherville Lutheran Church and the American Legion Auxiliary. She enjoyed playing computer games, going fishing, and doing word searches and Jumble puzzles. She took great pride in taking care of her yard.