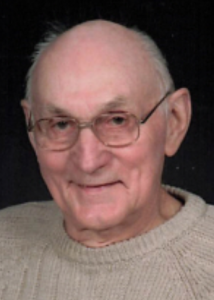 A memorial service will be held 11 a.m., Tuesday, November 23, 2021 at St. Paul Lutheran Church in Garner with Rev. Scott Kozisek officiating. Military rites will be conducted by the Garner Veterans Ceremonial Unit.

Visitation will be held one hour prior to services at the church on Tuesday.

Memorials may be directed to St. Paul Lutheran Church.

Arthur Louis Zurn, the son of Leo and Elsie (Krengel) Zurn, was born June 28, 1927 in Callaway, Minnesota. He attended school at Callaway. Art served his country in the U.S. Army during WW II in the Pacific Theatre. Following his honorable discharge, he returned to Minnesota and worked for the Chicago Northwestern Railroad for 38 years as a railroad engineer. On October 3, 1987 he married Sherry Cogill in Mason City. They lived in Bloomington, MN, Forest City, Garner and in 2017 moved to the Willows in Mason City. He enjoyed reading, gardening and working outdoors.

He was a member of St. Paul Lutheran Church in Garner, NARVRE (National Association of Retired Veteran Railway Employees) and the United Transportation Union.

He was preceded in death by his parents; two brothers, Francis and Walter Zurn; and sister, Faye Polan.