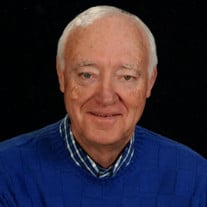 Funeral Mass will be held at 10:30am Friday November 12, 2021, at St. Patrick’s Catholic Church, 1001 9th Ave S, Clear Lake, IA, with Father Josh Link as Celebrant. Interment will take place in Clear Lake Cemetery where Military Honors will be done by VFW Post 4868 .

A Visitation will be from 5:00pm to 7:00pm Thursday, November 11, 2021 at Ward-Van-Slyke Colonial Chapel, 310 First Ave North Clear Lake, with a Rosary led by the Fourth Degree Knights of Columbus to begin at 7:00pm.

Memorials may be directed to the Alzheimer’s Association.

Terry was born on December 11, 1946, in New Hampton, IA, the son of Charles and Mable (Gaffney) Hoil. He was a graduate of Mason City Newman High School Class of 1965. Terry was committed to furthering his education his entire life. After high school he received his AA from North Iowa Area Community College in 1967, his BA from the University of Northern Iowa in 1972, and completed his Master’s Degree in Public Administration from Iowa State University in 1983.

Terry married his wife, Trudi (Ammons) in Osage, IA on July 15, 1967. From this union, three children were born. He enjoyed spending time with family and friends, fishing in Canada, wintering in Texas, and cheering on the Cyclones and Packers.

Terry started a long career in Law Enforcement when he joined the Marshalltown, IA Police Department in 1970. He joined the Iowa Bureau of Criminal Investigation (known today as the Iowa Division of Criminal Investigation) as a Special Agent in 1972. His career brought him and his family to Clear Lake in 1973. After 17 years in Clear Lake, he served the DCI in administration as a Special Agent in Charge in Des Moines, IA until his retirement in 2002. Following retirement, he spent several summers working with the Iowa DNR as a Lake Patrol Officer.

Terry also had a strong commitment to serving his country, joining the US Navy Reserves in 1986. After 20 years of service, including active duty on the USS New Orleans during Operation Desert Storm, he retired with the rank of Master Chief Petty Officer. He was a valued mentor in both his military and civilian careers.

The family would like to thank Good Shepherd and St. Croix Hospice for the excellent care they provided Terry, as well as the Alzheimer’s Caregivers of North Iowa Support Group for their kindness and guidance throughout hard times.