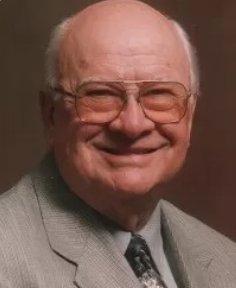 Deacon Philip Doocy, 91, of Bancroft, died Friday at Accura Healthcare in Bancroft. A funeral Mass will be held Wednesday at 10:30 AM at Divine Mercy Parish ~ St. John’s Catholic Church in Bancroft. Burial will be in St. John’s Catholic Cemetery with military honors conducted by the Bancroft American Legion. The funeral will be live streamed on the Divine Mercy YouTube page, https://youtu.be/DQ6oNxSCLjU.

Visitation will be from 5 to 7 PM Tuesday at Oakcrest Funeral Services of Bancroft with a Scriptural Prayer Service beginning at 7 PM. Further visitation will be one hour prior to the Mass at the Church on Wednesday. In lieu of flowers, memorials may be directed to Catholic Charities, in Phil’s memory.

Philip Doocy was born in rural Swea City October 11, 1930, the son of William F. Doocy and Helen (Butterfield) Doocy. After initially attending school in Swea City, the Doocy family moved to Bancroft, where Phil attended St John’s High School. He loved his involvement in high school plays and musicals and made many life long friends though those experiences.

After graduation, Phil served his country in the Marine Corps from 1951-1952. On October 22, 1956, Philip was united in marriage to Jane Hicks of Algona. They were blessed with four children. Phil’s beloved Jane passed away in 2013. Phil had two careers. The first involved his work at Kennedy’s Store. He started there as a high school student and would later become manager. He served in that capacity for more than 30 years, becoming a friendly, trusted figure on Main Street in Bancroft, before retiring in 1995. In 1983, Phil was ordained as a Deacon of the Catholic Church, serving the St John’s parish. The opportunity to serve his church and his community were among the highest honors of his life. Phil and Jane made a great team, sharing their ministry with generations of parishioners at St.John’s.

Phil had a few hobbies that he enjoyed throughout his life, but none more than fishing. He loved to fish. And, even more he loved to brag about the fish he caught.