This news story was published on November 13, 2021.
Advertise on NIT • Subscribe to NIT

On Tuesday, November 9th, 2021 at about 4:52 pm, an Estherville Police Officer conducted a traffic stop on a vehicle in the 400 Block of North 12th Street for a traffic violation. It was determined that the driver of the truck was operating with a suspended drivers license. Officers also smelled the odor of marijuana coming from within the vehicle. The vehicle was occupied by a male driver and a juvenile male passenger.

The driver of the truck was identified as 18-year-old Cruz Hernandez-Gonzalez of Estherville. Cruz was arrested without incident and transported to the Emmet County Jail. The 17 year old juvenile male was released to the custody of a relative. 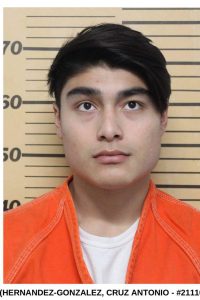