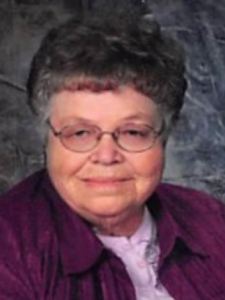 Interment will be held in the Memorial Park Cemetery.

Memorials may be directed to the family of Carren Schaer. Robin would like to give special thanks to St. Croix Hospice, Manly Specialty Care Center and those family members that came to see Mom during her final weeks.

Carren was born October 7, 1942, daughter of Ubbe and Marie Gotfried in rural Belmond.

She graduated from Belmond High School in 1961. After graduation she moved to Minneapolis and worked at Daytons. After her father passed away, Carren moved to Clear Lake with her mother. She then worked for A.C. Nielsen as a keypunch. When A.C. Nielsen started to move their location, she became a homemaker. It was then that a mutual friend introduced Carren to John Schaer. They quickly fell in love and were married on August 3, 1973. Four years later their daughter Robin was born. Her grandson Jason was born in 2003 and was Carren’s pride and joy.

Carren and John were members of the River City Tri-club (Citizens Band Radio) for many years. Carren was a Lifetime member of the VFW Auxiliary – serving as the treasurer for the last 16 years, St. James Tuesday Quilt club, Grandmothers Group of Mason City and a past member of the Moose Women.

Carren had many hobbies. She has collected over 500 salt and pepper shakers and nearly 100 cookbooks! She loved to read books – especially Western romances and quilting. She loved to travel, going to the VFW and listening to Full House Band, and attending Toby Keith concerts. She also loved going to the races to watch her nephews and Jeff Aikey drive around in a circle on dirt! Most of all Carren loved her family, she would look forward to Spring when she and her grandson would move to the family campground and hear and share in all the stories.

Carren was preceded in death by her husband John in 2005, her parents, mother and father-in-law, aunts and uncle, brother-in-law and sister-in-law and 2 nephews.