AMES – Iowa State  used a huge third quarter to defeat Texas, 30-7, Saturday at Jack Trice Stadium.   The Cyclones improved its school-record streak of consecutive victories vs. league opponents at home to 10, the best active streak in the Big 12.

ISU has a three-game winning streak over the Longhorns, the longest ISU winning streak in the series…ISU has won three out of its last four games vs. Texas at Jack Trice Stadium.

Iowa State finished with 5.0 sacks, the most against the Longhorns in series history.

Iowa State’s 476 yards were the second-most by the Cyclones against Texas in series history.
The Cyclones allowed just 103 passing yards…the third time this season allowing less than 110 passing yards.

Iowa State’s defense has allowed seven or less points in the second half in four of five home games this season.

Iowa State’s defense allowed just 81 yards in the second half.

Attendance: 61,500…fourth sellout of the season, most in school history since the new configuration.

ISU has had over 60,000 fans in attendance in all five home games this season, the best streak in school history.

Breece Hall
*Surpassed 1,000 rushing yards in a season for the second consecutive year, the ninth Cyclone in school history with multiple 1,000-yard seasons.
*Increased his Big 12 record-streak of consecutive games with a rushing TD to 21. It ties for the third-best streak in NCAA FBS history. *His 47-yard touchdown run was his longest rush at Jack Trice Stadium.
*18th multi-TD game of his career, tying for fourth in Big 12 history (Cedric Benson, Texas).
*Posted his 19th career 100-yard rushing game, tying for the sixth-most in Big 12 history (Justice Hill, Oklahoma State)…also ties for the second most in Iowa State history (Dexter Green, 1976-78).
*Has 74 career receptions, tying for fourth-most in school history by a running back (Darren Davis, 1996-99).

Xavier Hutchinson
*Has had at least seven catches in five of nine games this season.
*Has a reception in 21-straight games, tying for the eighth-longest streak in school history.
*Tossed his first career touchdown pass…the first by a non-QB since Deshaunte Jones to La’Michael Pettway in 2019 vs. Iowa.

Charlie Kolar
*Increased his streak to 32 consecutive games with a catch, tying for the second-best streak in school history. *Has 33 catches this season, the eighth most by a Cyclone tight end in a single season.

Will McDonald
*Broke the Iowa State career record with 27.5 sacks, passing JaQuan Bailey.
*Has a sack in 18 of his last 24 games.
*Has 25.5 sacks in his last 25 games.
*Finished with a career-high six tackles…forced his fourth fumble in the last six games. 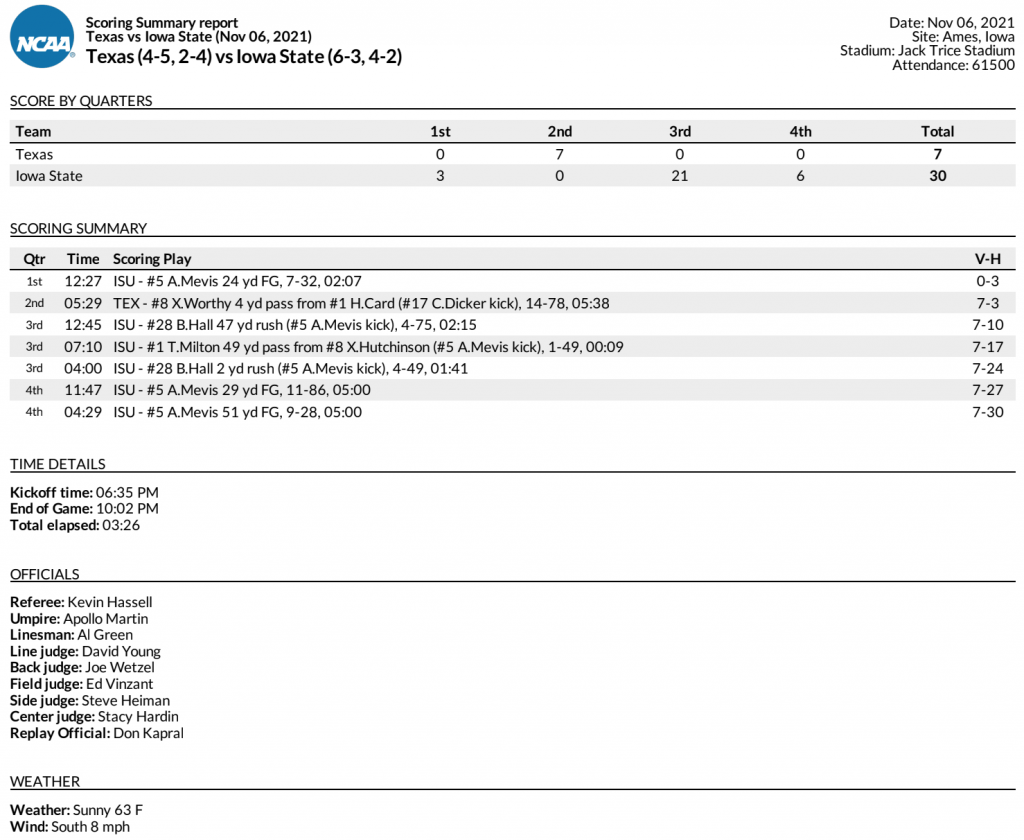