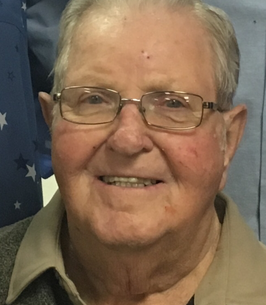 Wayne William King, the son of Joseph and Verna (Hamilton) King, was born on November 27, 1934, in Algona, Iowa. On Monday, October 25, 2021, surrounded by his family at his home in Estherville, Iowa, God called him home at the age of 86 blessed years.

Wayne received his education at Estherville High School, graduating in 1953. He then enlisted in the United States Army in 1957, where he served overseas in Korea and was honorably discharged in 1959. He later used his G.I. Bill to obtain his AA degree from Iowa Lakes Community College.

While being a husband and a father, Wayne worked hard selling Life and Health Insurance and helped others as a realtor to find their perfect home, before retiring at the young age of 80 in 2014.

Wayne is preceded in death by his parents, Joseph and Verna (Hamilton) King, siblings Dale King, Betty (Don) Kafer, and Gary (Judy) King; sister-in-law and brothers-in-law Kathy (Chuck) Mallow and Tom Fraser, as well as many other extended family and friends.

In lieu of flowers memorials are preferred to the Estherville United Methodist Church, Estherville Parks and Rec Board, or Avera Hospice.