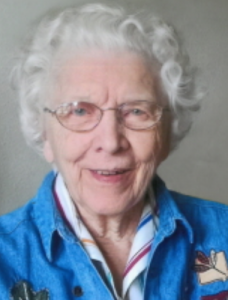 Cecilia Mary (Ruzicka) Holzer, age 96, passed away Wednesday, October 20, 2021 at Sunny View Care Center in Ankeny, Iowa. She was a life-long resident of the Charles City area until moving to Sunny View in 2018.

The Mass of Christian burial will be held Tuesday, October 26 at 10:30am at Immaculate Conception Church in Charles City with Reverend Tom Heathershaw officiating. The funeral Mass will be lived streamed on the Hauser Weishaar Funeral Home Facebook page; https://www.facebook.com/HauserWeishaarFH/ .Burial will follow at Calvary Cemetery in Charles City.

Friends may greet the family from 5-7pm, followed by a Scripture Service on Monday, October 25 at Hauser Weishaar. Visitation continues one hour prior to Mass at the church on Tuesday.

Cecilia Mary Ruzicka was born December 13, 1924 to William Wenselas and Mabel Mary (Osier) Ruzicka on a farm in rural Marble Rock. Her father passed away in 1927 and her mother then married Daniel Francis Koenigsfeld. It was while growing up on the farm that Cecilia became a “diehard Chicago Cubs fan”! She would listen to the baseball games during the day and then give her stepfather the report of the game that evening! She attended Roseville Catholic School and then would take the train to Charles City and stay with her grandparents to attend high school at Immaculate Conception Academy, graduating in 1942. After graduation, she moved to Dayton, Ohio to work for Western Union. She missed her family and moved home in 1945. She then worked for Clarence & Dorcas Bryant. While working there, she met a young man who was also working for the Bryants. The story goes that Cecilia needed someone to help wash windows so while she washed the inside of the window, Clete washed the outside. Cletus Joseph Holzer and Cecilia were married November 10, 1947 at St Mary’s Catholic Church in Roseville. For the next 35 years they raised their family and farmed west of Charles City until they retired in 1984. In their retirement years, they took yearly vacations that included attending Clete’s annual Army reunions from California to Georgia. Cletus passed away in 1999 and Cecilia continued to be active at Immaculate Conception Church. She was a member of St. Theresa’s Circle, Rosary Society and the parish gift shop was one of her passions. She enjoyed going to daily Mass, gardening, canning and baking, exercising at The YMCA, going out to eat, (especially if ice cream was on the menu), watching sporting events on TV, playing cards and visiting friends and family.