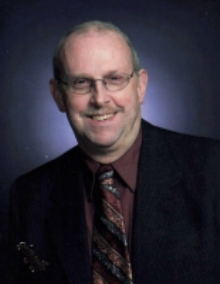 Celebrating the life of Dennis K. McMillan, servant of God who was born in Evanston, Illinois on October 19, 1948 to Andrew J. and Phyllis U. McMillan. With his wife at his bedside and the loving hearts of his children, he was received into the caring arms of Jesus on October 17, 2021 at Good Shepherd Health Center in Mason City, Iowa.

Services will be livestreamed on First Covenant’s Youtube Page.

In lieu of flowers, in honor of Dennis’s love of people and service, please make donations to the North Park University and Theological Seminary Scholarships, North Iowa Community Response Team (CERT), or a charity of your choice.

His younger years were spent growing up in the suburbs of Chicago with his brothers, Bruce and Chuck, and his sister, Nancy. He loved being part of the set crew for plays while at Arlington Heights High School, graduating in 1967. At Culver-Stockton College, Canton, MO, he studied Business and Economics. He was a charter member of Beta Gamma Phi/Alpha Tau Omega fraternity which celebrated its 50th Anniversary on September 25th. Several lifelong friendships developed through those years. Though not able to attend, he was inducted into the “Top of the Hill” Club which recognized the 50th year reunion members of the class of 1971.

Arranged by mutual friends, he met his wife, Melody Skalla, in January of 1971. On a double date to a basketball tournament at her college unbeknownst to them, North Park played against his college, Culver-Stockton. They were married on May 20, 1972 and were looking forward to celebrating their golden anniversary in 2022.

Dennis was called to the ministry. With one child and another on the way, he attended North Park Theological Seminary. In 1979, he graduated with a Master of Divinity Degree (and Keith, Erin, Heather, and Shannon). He served multiple rural churches in Illinois and Iowa as their pastor. He was a volunteer chaplain for the Montgomery County Sherriff’s Department for two years and for the Iowa State Patrol for 22 years.

Dennis was an involved, caring Dad from changing a diaper on the first day they were born to the present. Though his pastoral schedule kept him busy, he made the time to support them in their activities; Scouts, school programs, music and speech contests, sports, and plays. His day off was devoted to family time.

Dennis was an avid lover of history and reading. But more than that he was a genuine lover of people. Throughout his life he was a person who cared about people, knew them by name, greeted warmly and sincerely and always had time to sit down for a cup of coffee and talk. As people grew to know him, they appreciated his humor.

In later years, he worked at Winnebago and nearing retirement, was a greeter at Wal-Mart; an appropriate job for a man who loved people. During retirement, he and Melody enjoyed their time together reading, doing puzzles, being with his children and grandchildren, and spending time in Lakeside, MI, with their lifelong friends. A highlight for him was going to Israel in 2016 and experiencing the land and people he had read about in his Bible. While there, he reaffirmed his baptism in the Jordan River, got caught in a rare downpour and saw a rainbow in the desert.

He was preceded in death by his parents, Andrew and Phyllis McMillan; brother, Chuck; and beloved fur baby, Mollie.
Celebrating Dennis. Peace to his memory.