This news story was published on October 13, 2021.
Advertise on NIT • Subscribe to NIT 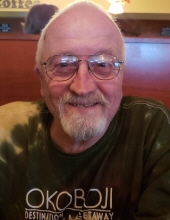 William R. Martinson, Jr., 74, of Mason City, died October 9, 2021 at Mercy One with his daughter by his side. Per his wishes, his body was cremated.

Memorials may be directed to the William R. Martinson, Jr. Memorial Fund in care of the family.

Bill was born March 10, 1947 in Lake Mills, Iowa, the son of William and Cora (Ellingson) Martinson, Sr. In 1965, he graduated from Mason City High School and enlisted in the United States Army where he served in the Vietnam War. He then married Cynthia R. Kline on September 13, 1969 in Northwood, Iowa. He worked for the City of Mason City for 35 years before his retirement in 2016.

Bill enjoyed spending time with his family and friends, trying his luck at the casino, and always liked to keep the motor running looking for the next “good deal”. Bill looked forward to going to Okoboji 3 times a year with his family. When Bill wasn’t outside working in the yard, he enjoyed watching t.v. especially old westerns and sports. He was a die-hard Packer fan and would love to banter back and forth with anyone who was not. When Bill was young he had a passion for drag-racing and his love of cars never stopped.

He was preceded in death by his bride, Cindy; his parents, mother and father-in-law, brother Milford, sisters Karen Lien and JoAnn Carlsen, and brothers-in-law Joe Pavelka, Jack Lien and Darrell Carlsen.