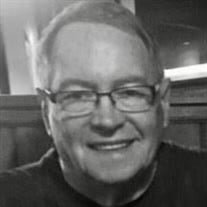 Family will hold a Private Celebration of Life.

Bob was born on February 26, 1944, in Pine Bluff, AK, the son of Henry and Rose (Cunningham) Gaubatz. He grew up in Dougherty, IA before moving to Chicago in 1953. Bob was a graduate from St. Francis de Sales Class of 1962. After graduation he was drafted into the Army, serving his nation during the Vietnam War as a staff sergeant in Korea. Following his honorable discharge he joined the workforce in the Chicago area where he then met his wife. In 1969 Bob married Margy Richwine, from this union two daughters were born. In later years, 1975 to be exact, the family moved to Mason City, IA. Bob worked for 30 plus years at LeHigh Cement Company as a foreman and kiln operator, until his retirement in 2006. In his retirement he dedicated his time to prison ministries.

Bob loved music and was a talented dancer, including an appearance on American Bandstand and often sang at church. He was an excellent cook who enjoyed passing his recipes on to others. He enjoyed plants and gardening. He adored his family; especially his grandchildren, and had a beloved Church family as well. His main passion in life, however, was helping others, and witnessing by example. There was nobody to whom Bob would not show love and grace, as Christ calls us all to do.

Bob is preceded in death by both his parents; his brother, Tom Gaubatz; as well as numerous other extended family members and friends.