This news story was published on September 25, 2021.
Advertise on NIT • Subscribe to NIT 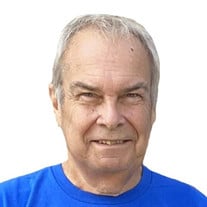 Robert (Bob) Patterson, 71 of Mason City Iowa passed away on Thursday, September 23, 2021 at MercyOne North Iowa Hospice of Mason City, surrounded by his children, after a courageous battle with Cancer.
Family will greet friends from 2:00 p.m. to 4:00 p.m. Saturday, October 2, 2021 at Hogan-Bremer-Moore Colonial Chapel, 126 3rd Street NE, Mason City, with a Celebration of life at 4:00 p.m.
Memorial contributions may be directed to MercyOne North Iowa Hospice, Mason City.
Bob brought joy into the lives of his parents, Lyle and Ann (Winter) Patterson on September 22, 1950. He was a Buffalo Center Bison and graduated with the class of 1969. After high school, he attended Iowa Lakes Community College in Estherville. Then went on to obtain his Bachelor of Science in Education at Northeast Missouri State University in 1974, known today as Truman State University in Missouri.

His teaching career started in Kirksville, MO., where he taught for two years. He then taught school at Alta, IA., until he planted his roots in Rudd Rockford Marble Rock, where he taught 5th and 6th grade. He was a golden apple award winner and was beloved teacher for 27 years before his retirement in 2005.

Amongst the things he loved the most were his family, following Kelly Shyrock wherever he raced at and watching the Iowa Hawkeyes.

Bob could not go anywhere without stopping to visit with a friend, co-worker or one of his students. He always had a smile to share and a joke to tell to make those laugh around him. The moments of laughter he shared with others will be cherished for a lifetime to come.
His family would like to thank the MercyOne staff along with the staff at MercyOne North Iowa Hospice
for making his last months as special and joyous as they could be.

Bob was preceded in death by baby Patterson, and his Mother and Father.