This news story was published on September 17, 2021.
Advertise on NIT • Subscribe to NIT 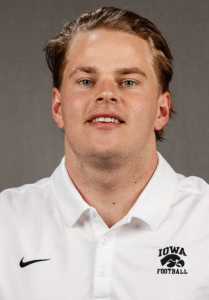 IOWA CITY – University of Iowa sophomore punter Tory Taylor has been named Big Ten Co-Special Teams Player of the Week following No. 10 Iowa’s 27-17 win at No. 9 Iowa State on Saturday in the Iowa Corn Cy-Hawk Series. The announcement was made Monday by the Big Ten Conference office.

Taylor earned the Big Ten honors after playing a key role in Iowa’s 27-17 win at Iowa State. He averaged 51.1 yards on eight punts, with a long of 69 yards. Five of his punts were downed inside the 20, while Iowa State had just one punt return.

Taylor (6-foot-4, 231-pounds) is a native of Melbourne, Australia. He earns his first Big Ten Player of the Week Honor. He was named to the Ray Guy Award preseason Watch List in July after being named a semifinalist for the award in 2020.

Taylor is the second Hawkeye player to earn conference accolades this season. Defensive back Riley Moss was named Defensive Player of the Week following Iowa’s 34-6 season-opening win over No. 17 Indiana.