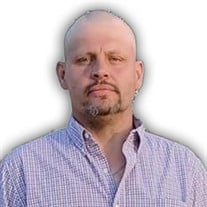 Family will be having a Private Memorial Service at Bride Colonial Chapel.

James was born August 31, 1975 in Ames, Iowa, the son of Randy and Sandie (Shetton) Choate, the brother to Connie, Bobbie Jo, Jason, John, and Craig, the father of Micheala, and Randy, the uncle to several, and a friend to many.

James attended Eldora New Providence Schools where his mental illness began to come to light during his early elementary years. James struggled greatly during his life with mental illness. The system had failed him and he turned to drugs to self medicate, enhancing his mental illness, which became a vicious cycle that he fought until the end.

Those left to cherish the memories of James will always remember his huge heart and his willingness to do anything for anyone. James had the ability to fix anything, always tinkering with some sort of vehicle or tool. Children and animals were drawn to him, he calmed them, and in return they helped him relax.

James is survived by his children, Micaela and Randy; his mother, Sandie Choate; brothers, John Choate and Craig Choate, as well as many nieces and nephews.

James was preceded in death by his father, Randy; his sisters, Bobbie Jo and Connie; and brother, Jason.