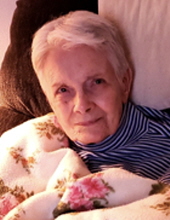 A funeral service for Luella Barker will be held at 1:00 p.m. on Thursday, July 29, 2021 at Hauser Weishaar Funeral Home in Charles City with Pastor Daniel Larson officiating. Burial will be at Oakwood Cemetery in Floyd.

Visitation will be one hour before the service at the funeral home on Thursday.

Luella Daisy (Maudlin) Barker, the daughter of Leonard and Elsie (Scott) Maudlin, was born January 22, 1932 in Hatfield, Missouri. She graduated from Clearfield High School in 1950. On August 10, 1951, she was united in marriage to Ralph Barker in Redding, Iowa.

Luella worked for a dime store until her marriage, and then moved to California where Ralph was stationed with the United States Army for almost 3 years. The couple moved to Indianola and Ralph worked at Sears in Des Moines and Luella stayed home with their children and worked at a restaurant, they then moved to Winterset and managed a motel for three years, moved back to Indianola where they purchased another motel. In 1972, they traded that motel for the Heart Court Motel in Charles City and owned that for about five years, bought and managed a mobile home park in Montezuma for another five years and finally moved back to Charles City.

Luella enjoyed reading and spending time with her family.

She was preceded in death by her parents; husband, Ralph in 2017; three sisters, Nellie Bethel, Thelma Drake and Linda Fletchal; and brother, Elvis “Bud” Maudlin.