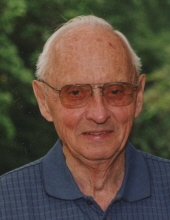 Lyle was born at Story Hospital in Mason City, his Aunt Dollie Story’s hospital, to Wintie Dowell Butler and Ethel Marie Merchant Butler. He was a longtime member of St. Paul Lutheran Church where he married Corrine Marie Johnson. They celebrated 68 years of marriage on June 27.

He attended the country school in B20, Clear Lake Schools and graduated from Mason City High School in 1947.

He retired from IMI Cornelis but always considered himself a farmer. He was a veteran of the Korean War 1951-1953, serving in the Army and stationed in Europe. In his free time, Lyle in enjoyed camping, traveling, and square and polka dancing.