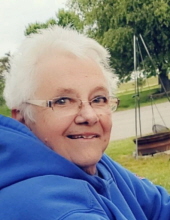 Linda Jean (Hansen) LaChapelle, the daughter of Harvey and Velora (McFarland) Hansen, was born January 21, 1945 in Osage, Iowa. She received her education in Mitchell, Iowa.

Linda was united in marriage to Marc Reams in 1961 and this union was blessed with four boys: Jim, Gene, Lee and David. The couple later divorced. In 1986, Linda married Eugene “Geno” LaChapelle and they made their home in Mona, Iowa. When Geno passed away in 2015, Linda moved to Charles City about a year after to be closer to family.

Linda worked at Wood Harbor Cabinets, Austin Packing Company and Wee Saints Daycare throughout her working career. She was fondest of her most recent job, camp host at East Rudd Campground. Linda loved all of the time spent with family/camping family and friends over the past five years at the campground creating life long memories.

Linda enjoyed camping, cooking, baking, watching birds, feeding birds, gambling (not so much in recent years) and gardening (both vegetable and flower).