This news story was published on May 22, 2021.
Advertise on NIT • Subscribe to NIT

CEDAR RAPIDS – A woman who illegally returned to the United States after being deported was sentenced today to six months in federal prison.

Maria Manzo-Melchor, age 40, a citizen of Mexico illegally present in the United States and residing in Waterloo, Iowa, received the prison term after a guilty plea on January 21, 2021, to one count of illegal reentry into the United States after having been deported following a conviction for an aggravated felony.

In a plea agreement, Manzo-Melchor admitted she had previously been deported from the United States and illegally reentered the United States without the permission of the United States government. Manzo-Melchor was deported in November 2008 following a conviction in the Iowa District Court for Black Hawk County for forgery, an aggravated felony, for using a fraudulent permanent resident card, also known as a “Green” card. In September 2020, Manzo-Melchor came to the attention of immigration agents following her arrest for Domestic Abuse Assault and Reckless Use of Fire or Explosives in Black Hawk County, Iowa. These charges are still pending in state court.

Manzo-Melchor is being held in the United States Marshal’s custody until she can be transported to a federal prison. 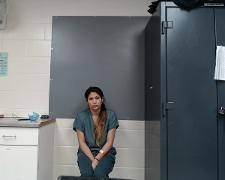