This news story was published on May 19, 2021.
Advertise on NIT • Subscribe to NIT 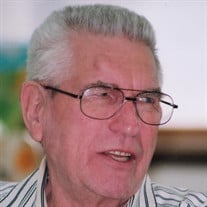 Arlon G. “Ike” Zeigler, 91, of Mason City and formerly of Alexander and Meservey, passed away Sunday, May 16, 2021 at the Muse Norris Hospice Inpatient Unit in Mason City.

A private family graveside service will be held at a future date in Alexander.

In lieu of flowers and customary remembrances, memorials may be left in Ike’s honor to MercyOne North Iowa – Hospice.

Arlon Glen was born on March 24, 1930 in Amsterdam Township near Kanawha to Glen and Helen (Mrazek) Zeigler. He grew up on the family farm alongside siblings, Betty, Mary, Suzan, and John “Jack.”

Following high school Ike joined the United States Army where he served during the Korean War from 1952 until 1954, with most of his time served in Germany. Prior to his deployment Ike was united in marriage to Marjorie Davis on April 26, 1952 in Jeffersonville, Indiana. They were blessed with nearly 20 years of marriage before Marjorie preceded Ike in death on November 2, 1970.

On June 10, 1972 he was united in marriage to Catherine Dirksen-Schmidt at Bethlehem Lutheran Church.

For nearly 25 years Ike farmed between Alexander and Meservey. After leaving the farm and moving to Mason City, he worked at Decal Specialties and retired from IMI Cornelius.

Ike also enjoyed the outdoors and loved fishing and hunting with family and friends alike. He cherished time spent with his children and grandchildren and always looked forward to popcorn and westerns on Wednesday night!