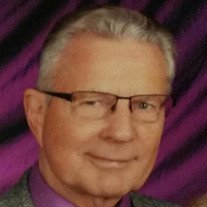 Gene Larsen, 82, of Mason City, passed away on Monday April 19, 2021, in Rochester, MN. Upon his wishes, his body was cremated. Inurnment will be at Elmwood – St Joseph Cemetery, where a private service will be held at a later date.

Gene was born on December 4, 1938, to Burnham and Mabel (Weaver) Larsen, in Cedar Falls, Iowa. He graduated from Cedar Falls High School in 1957, and UNI with a Business Degree. While going to college, he was an officer with the National Guards. Later in life, in obtained his CPA Certification. He had a 40 years career with the IRS. Gene married Susan White in 1958, and to this union three children were born, Cindra, Gina, and Douglas. On February 27, 1988, Gene married Michele Quibel at The Little Brown Church in Nashua, and his family became Michele’s family, and Michele’s family became Gene’s family.

Gene was a member of St James Lutheran Church, and a longtime member of the Evening Lions Club. He played racquetball for many years at the YMCA, and the last few years switched to pickle ball, enjoying the slower game with a more social side. He took great pleasure in tinkering with the stock market on his computer. Gene and Michele traveled all over the United States, Europe, and Eastern Canada. They loved road trips and long distance train trips.

Gene is preceded in death by his parents, and five siblings, Bernard, Avanel, Leona, Robert, and Richard.

Memorial donations may be directed to the Hawkeye Harvest Food Bank, The Salvation Army, or World Vision at worldvision.org.

A gentle soul has left our world and is now helping light up the Heavens.