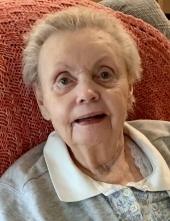 Mary Ann Schraan, 95, of Adel, formerly of Mason City, passed away Friday, April 16, 2021 at her daughters home. Memorial services will be held at 10:30 AM Saturday, April 24, 2021 at Our Saviour’s Lutheran Church with Pastor Matthew Muters officiating. Inurnment will follow in Memorial Park Cemetery. Memorials may be directed to the Mary Schraan Memorial Fund.

Mary was born July 24, 1925 the daughter of Ollie and Katherine (Johnson) Overgaard in Lennox, South Dakota. She attended school in Centerville, SD where she later graduated in the class of 1943. Mary went on to the University of South Dakota to further her education.

On June 25, 1950 Mary was united in marriage to Arnet G. Schraan and to this union two children were born. Over the years the couple lived in Minneapolis, MN followed by a move to Des Moines, IA for a couple years before settling in Mason City, IA in 1962. After arriving in Mason City, Mary joined the staff at Mercy Hospital as a medical technologist, she later went to work for Park Clinic until her retirement in 1981.

Mary loved using her talents doing all sorts of crafts including quilting at church with her friends. Mary and Arnie enjoyed a good round of golf and played many different courses throughout their travels. The couple spent many winters in Arizona, living in their park model across from the 9th green.

In most recent years Mary could be found working on a good word search puzzle. Mary thoroughly enjoyed raising her family, she has cherished her grandchildren and great-grandchildren and all the time they have spent together. Mary was a member of Our Saviour’s Lutheran Church where she had been involved as a Sunday School teacher as well as being part of the Altar Guild.