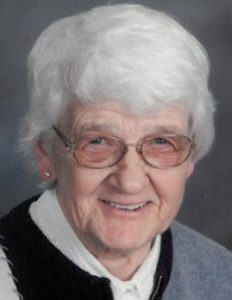 Kathryn Clara Tabbert, age 91, of Osage, passed away peacefully on Wednesday, April 7, 2021, at the Faith Lutheran Home in Osage.

Kathryn was born June 26, 1929, in the family home near Alexander, the daughter of Fred Sr. and Grace (Dirksen) Wenzel. She attended school in Alexander. Kathryn was united in marriage to Eldred Tabbert on April 6, 1952 in Alexander. The couple lived in Mitchell County where they farmed. Eldred died July 2, 1987. Kathryn was a member of St. John’s Lutheran Church. In 1985 Kathryn took on the raising of two of her grandsons, Jon and Josh. She enjoyed gardening, growing flowers, canning fruits and vegetables from her garden, playing cards and collecting spoons from her travels. Most of all she enjoyed spending time with her family.