This news story was published on February 19, 2021.
Advertise on NIT • Subscribe to NIT 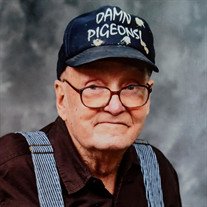 Funeral Services will be held 1:00 p.m. Sunday, February 21, 2021 at Conner Colonial Chapel, 1008 1st Avenue South, Northwood, IA 50459 with Rev. Becky Sogge of First Lutheran Church officiating. He will be laid to rest beside his wife at the South Shell Rock Cemetery, Northwood, IA.

Visitation and public viewing will be one hour prior to the funeral service at the chapel.

Arthur Henry Kalvig was born April 3, 1928 near Manly, IA, the son of Verne and Marie (Thiel) Kalvig. On December 6, 1947 he married the love of his life, Frances Catherine Brown. To this union three children were born, Harold, Linda and William.

For many years, Frances and Art moved around the state, following Art’s job as a mechanical draftsman. Finally, the family settled alongside the Shell Rock River, in a house built by Art himself in 1974. Art enjoyed putting together puzzles and working with his hands. On a warm day, Art and Frances could often be found enjoying their porch, admiring the wildlife and river.

Preceding him in death are his parents; a daughter, Linda and her husband Larry Brown; a grandson, Mike Kalvig; his brothers: Carl, Meryl, Elmer, David, Donald, and Raymond; a sister, Rachel; a brother-in-law, Joe Brown; as well as extended family members.