This news story was published on January 26, 2021.
Advertise on NIT • Subscribe to NIT

CEDAR FALLS – The UNI men’s basketball team defeated the Kohawks of Coe College 70-60 in the McLeod Center on Monday night.

The Panthers took an early lead against their Division III opponent and took a 40-30 lead into halftime. The Kohawks got to within 3 points with 3:41 remaining in the half before Trae Berhow unloaded 8 points in the final three minutes to give the Panthers a 10-point lead into the break.

The Panthers continued to pour it on early in the second half, moving ahead 49-32 just three minutes into the half. The Kohawks didn’t go quietly, going on runs of their own to get within 9 points with 5:36 remaining in the game. The Panther defense held Kohawks off to walk away with a 10-point victory.

Noah Carter provided highlight-reel plays throughout the game, finishing with a powerful dunk with 13:46 remaining in the second half going up 56-37, the Panthers largest lead of the game. Carter finished with 13 points and a team-high 8 rebounds.


THE KOHAWKS:
– Jacob Robertson scored a team-high 14 points and hauled in 6 rebounds.
– Coe scored 22 points in the paint.
– Coe’s bench accounted for 23 of their 60 points.

UP NEXT:
The Panthers now travel to Carbondale, Illinois on January 30 for their series with the Salukis of Southern Illinois. The Panthers and Salukis will tip off at 3 PM on the MVC TV Network. 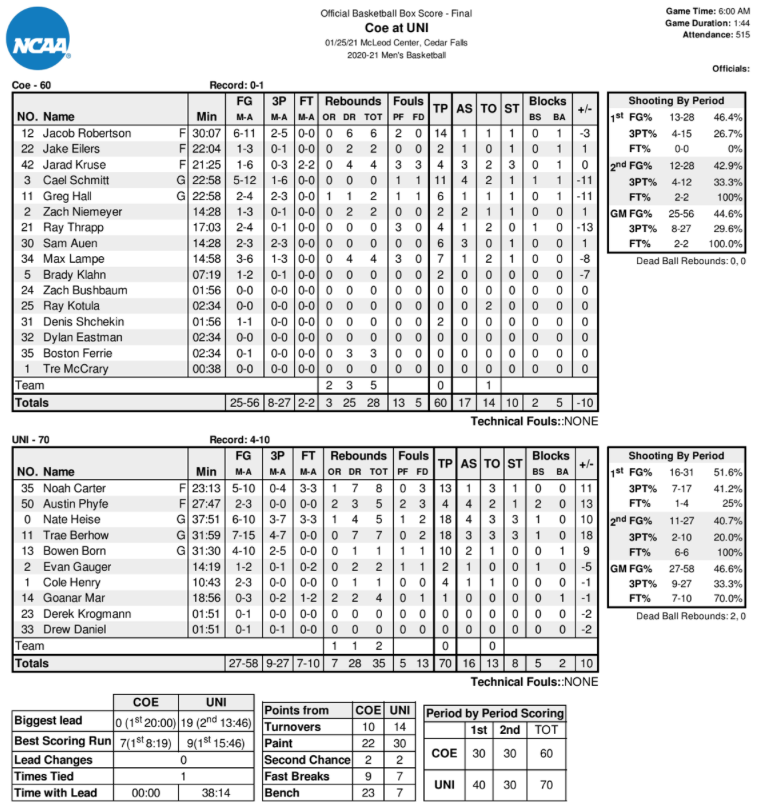