This news story was published on March 19, 2020.
Advertise on NIT • Subscribe to NIT 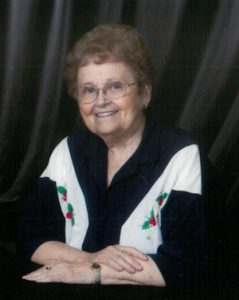 According to Marjorie’s wishes, cremation has taken place and a private graveside service will be held at a later date.

Marjorie Lorraine Nixt, the daughter of Clarence and Linnie (Usher) Blanchard, was born on March 6, 1926 in Charles City. She graduated from Nashua High School in 1944. Marjorie married Derwood Costello on May 3, 1945 and to this union three daughters were born: Duenda, Linda, and Gloria to join with Darlene and Delores to make a family. Marjorie helped Derwood farm for many years before moving to Nashua. The couple later divorced. Marjorie married Wilbert Nixt from Greene, Iowa and the couple enjoyed winters in Mesa, Arizona for 23 years.

Marjorie loved spending as much time as possible with family and friends and will be missed greatly by all those who loved her.