UNI led the way for most of the first half, but never by more than a handful of points at a time. The Panthers led 34-27 at halftime behind seven points from Karli Rucker. Nicole Kroeger and Megan Maahs each had six at the break.

The fourth quarter was a back and forth battle. Both teams traded leads, but Rucker went to the free-throw line with 6:15 left in the game. She hit the first shot to score her 1,000th career point. She closed the game with 1,008 career points and will now start climbing the all-time list. She is just eight points away from No. 24 Julie Street on the list.

Rucker was efficient going 8-11 from the field, including 2-3 from 3-point range. She also went 6-7 at the free-throw line. Rucker added five assists.

Megan Maahs and Nicole Kroeger scored 12 points each for the Panthers, while Bre Gunnels and Abby Gerrits scored eight each. Gunnels had a team-high 13 rebounds to lead the Panthers.

Notes
-Bre Gunnels finished with 13 rebounds.
-The Panthers shot 53% from the field and 11-14 from the free-throw line.
-The win secures UNI a top-six finish in the MVC regular-season race. The Panthers can finish anywhere from fourth to six, but will not play on Thursday at MVC Championship.

Up Next
The Panthers have their last regular-season matchup on Friday against Drake in the McLeod Center. The Bulldogs have an overall record of 22-7 and are 14-3 in the conference. 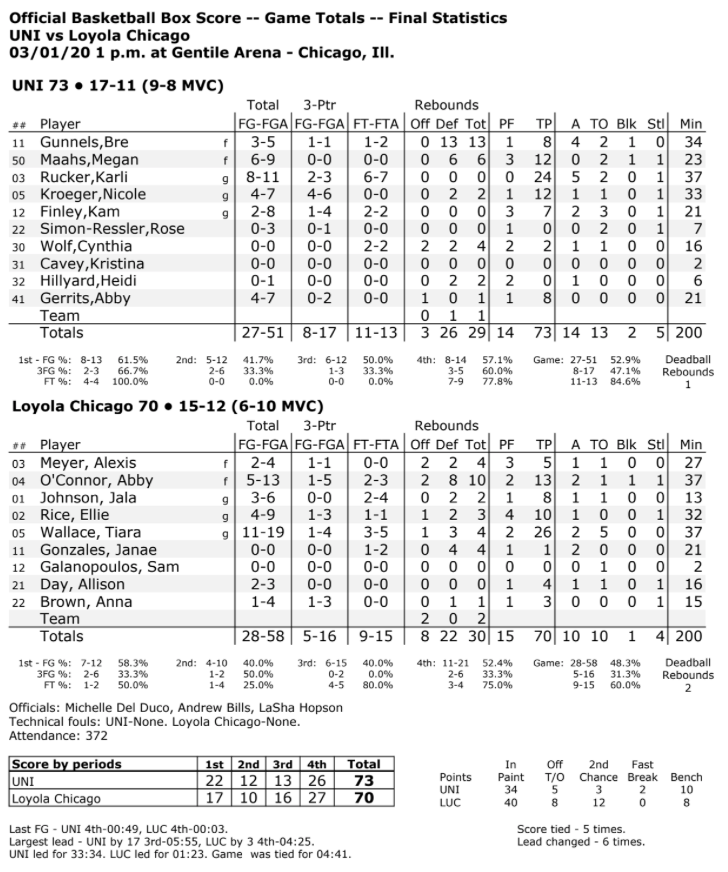