Iowa State came out of the gates fast, scoring the game’s first eight points, four of which came from redshirt junior big man Solomon Young. However, the quick start was soon followed by a 1-9 shooting stretch that allowed the Golden Eagles to knot the game at 12-12 with 12:22 to play in the first half.

Tyrese Haliburton helped ISU break out of the fund and bookend the half with yet another Cyclone run, knocking down a triple before a drive and dunk sparked the beginnings of 15-2 spurt to close the stanza. In total, five different Cyclones scored during the run, as Iowa State tallied the half’s final 11 points to take a 33-20 advantage into the locker room. Prentiss Nixon led all scorers with nine first-half points, to go with three rebounds and an assist in 18 minutes of first-half action.

The Cyclone momentum continued after the intermission, as Young scored Iowa State’s first seven points and the ISU lead grew to 40-22 less the three minutes into the second half. Nixon would later knock down his second 3-pointer of the evening to help spark yet another 11-0 Cyclone spurt to extend the advantage to 60-34 with 9:16 to play.

Iowa State exceptional at getting to the line in the second half, knocking down 17-of-22 from the charity stripe to help put the game away.

Cyclones of Note
Solomon Young was Iowa State’s leading scorer, tallying 14 points on a tidy 5-of-8 shooting. The native of Sacramento, Calif., also pulled down six rebounds in 20 minutes of action.

Point guard Tyrese Haliburton did a little bit of everything on Tuesday night for the Cyclones, netting 12 points on just four field goal attempts. He also posted a game-high nine assists, three steals and was charged with just one turnover.

George Conditt IV scored nine points on 4-of-5 from the field, grabbed six rebounds and swatted four shots on the night, leading to multiple transition opportunities for the Cyclones.

Next Up
Iowa State heads to Paradise Island in the Bahamas to begin Battle 4 Atlantis tournament play on Nov. 27 vs. Michigan. The game will tip-off at 11 a.m. CT and will be televised on ESPN. 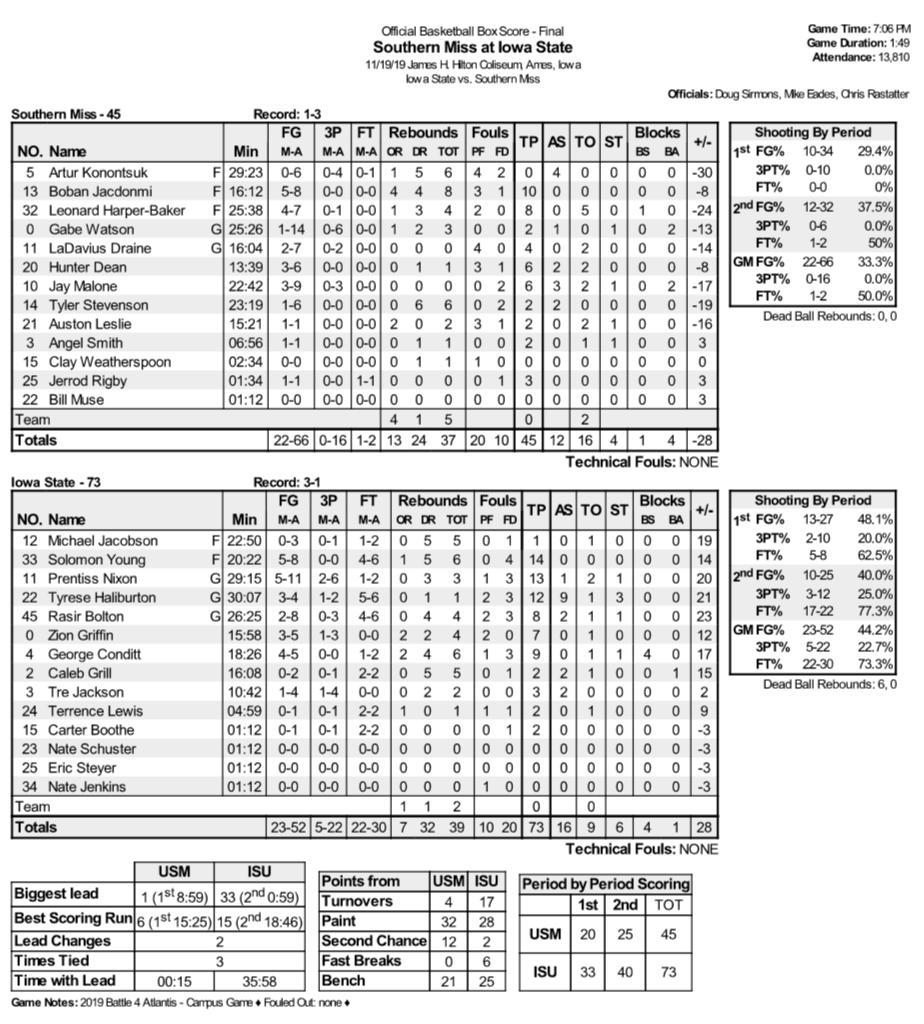