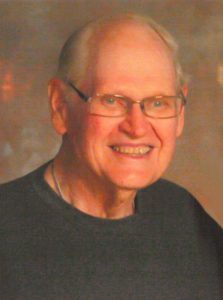 A funeral service for Richard Wynn will be held at 2:30 p.m. Saturday, September 28, 2019 at The Bridge Church in Charles City with Pastor Robert Williams officiating. Burial will be at Sunnyside Memory Gardens in rural Charles City.

A visitation will be at The Bridge Church in Charles City from 6:00 p.m. to 8:00 p.m. Friday, September 27, 2019 and will continue an hour before the service at the church on Saturday.

Richard Dale Wynn, the son of Harvey and Bertha (Allen) Wynn, was born on January 29, 1938 in Knoxville, Iowa. He graduated from Knoxville High School. During school, Richard was an illustrator for the yearbook committee and a member of the National Honor Society. Richard married Ethel Comfort on March 19, 1966 in Walden, New York.
Richard worked for Norm Westfall in Des Moines, was a superintendent for Pine Knolls Country Club in Knoxville from 1962-1975, and superintendent for Wildwood Golf Course from 1976 until his retirement in 2003. After his retirement, Richard was hired to mow fairways at Cedar Ridge Golf Course in Charles City. He was a very active member at The Bridge Church as treasurer and Sunday school teacher, and longtime member of the Iowa Golf Course Superintendents Association. He loved to play golf, read, put together jigsaw puzzles, and play word games with his family, especially Scrabble and Boggle.

He was preceded in death by his parents; two brothers: William (Maxine) and Lee (Irene); and two sisters: Edna Pearl (Harley) Cox and Mabel (Frank) McDonald.
Hauser Weishaar Funeral Home, (641) 228-2323, in Charles City, is in charge of local arrangements. Online condolences may be left for the family at www.hauserfh.com.