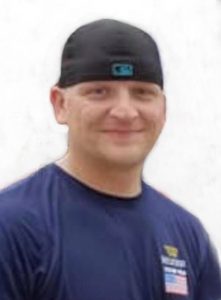 John Robert Leslie Carpenter, 34, of Charles City, passed away Monday, September 16, 2019 at the Mayo Clinic Hospital, Saint Marys Campus in Rochester, Minnesota with his loving family at his side.

A funeral service for John Carpenter will be held at 11:00 a.m. Wednesday, September 25, 2019 at The Bridge Church, 913 South Main Street, in Charles City with Mr. Erik Hoefer officiating. Burial will be at Sunnyside Memory Gardens in rural Charles City.

A visitation will be from 9:30 a.m. until the start of the service at the church on Wednesday.

John enlisted in the military after his graduation and was later discharged. He returned to Charles City and pursued a relationship with the love of his life, Ashley Gilbert, who he met on April 4, 2004. The couple was married on April 4, 2014 and made their home in Charles City. They had recently divorced, but were spending a lot of time together lately and working on getting back together. Their relationship was at the best point it had ever been.

John worked at Mitas/Trelleborg as a Supervisor, and had climbed the ladder of success with them starting on third shift since their doors opened. He was a volunteer with the Charles City Fire Department which allowed him to help with all of their tasks and at other departments too. His future plans were to become a full-time EMT. John was such a hard worker that for eight months last year he worked two full-time jobs.

John loved spending time with his family, especially Ashley and Duke, playing slow pitch softball, rugby (any physical sport really), bowling and playing video games under the screen name “Striker”. He was an avid Dallas Cowboys fan, and cheered them on even when they weren’t doing very well.

John was preceded in death by his paternal grandparents; brother, Russel Leslie Carpenter and beloved dog and companion, Duke.

The family requests no flowers or plants be sent instead please direct memorials to the family.

Hauser Weishaar Funeral Home, (641) 228-2323, in Charles City, is in charge of local arrangements. Online condolences may be left for the family at www.hauserfh.com.