This news story was published on May 25, 2019.
Advertise on NIT • Subscribe to NIT

CLEAR LAKE – A Clear Lake man crashed his pickup truck and emerged largely unscathed except for being arrested for felony drunk driving.

On May 25, 2019, at about 12.57 AM, Cerro Gordo county deputies responded to a report of a single vehicle injury accident in the 13000 block of Indigo Avenue, near the Mason City Airport. The driver, 36-year-old Michael Anthony Roe of Clear Lake, received minor injuries as a result of the crash. Roe’s 2018 GMC truck was found in the east ditch with major damage. Roe was transported to Mercy One by Mason City Fire Medics. Roe was treated and released and was then arrested for OW1 3rd offense (Class D Felony), open container (Simple Misdemeanor), fail to use safety belt (Simple Misdemeanor), fail to maintain control (Simple Misdemeanor) and carrying weapons while intoxicated (Aggravated Misdemeanor).

A female passenger was uninjured.

Deputies were assisted at the scene by Mason City Fire Medics and the Clear Lake Fire Department. 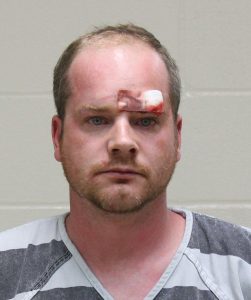