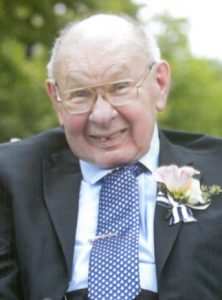 Vernon “Vern” Nieland, of Marshalltown, Iowa (formerly Charles City, Iowa), passed from this world on March 14, 2019, surrounded by family at the age of 91.

A Mass of Christian Burial for Vern Nieland will be held at 11:00 a.m. on Saturday, March 23, 2019 at Immaculate Conception Catholic Church with Reverend Gary Mayer officiating.  Burial will be at Calvary Cemetery in Charles City.

Visitation will be held on Friday, March 22, 2019 from 5:00 to 7:00 p.m. at Hauser Funeral Home with a Scripture Service beginning at 7:00 p.m.  Visitation will continue one hour before the Mass at the church on Saturday.

Vernon Henry Nieland was born on March 31, 1927 to William and Anita (Adler) Nieland in Red Lake Falls, Minnesota.  He and his only brother, Robert, enjoyed growing up in a small town.  They spent many hours hunting and fishing with their dad.  Vern’s love of gardening began with him helping his mother and dad pull weeds in their large vegetable and flower gardens.

Vern graduated in the Class of 1945 from Lafayette High School in Red Lake Falls, participating in football, basketball, baseball, and band.  On March 20, 1945, Vern enlisted in the US Navy and received his boot camp training at Great Lakes Naval Station in Illinois.  Upon completion, he served aboard the USS Palawan ARG-10 as an engineering division yeoman, 3rd class.  Vern served in the South Pacific Theatre, in the occupation of Japan in the Sasebo region, and in Shanghai, China.  After his discharge on July 5, 1946, he attended Hamline University in St. Paul, Minnesota, and graduated from Minneapolis Business College.  Vern began his work career at Minneapolis Moline in October 1950 and became a parts catalog technical writer.

In 1952, Vern met the love of his life, Winifred “Winnie” Joan Kosel.  They were married on June 20, 1953 at St. Anthony’s Catholic Church in St. Cloud, Minnesota.  Their marriage was blessed with four children:  Barb, Bill, Tom, and John.  They lived in St. Louis Park, Minnesota for 17 years before his work took him to Charles City, Iowa in 1972, where he worked for White Farm Equipment.  Vern was later transferred to Libertyville, Illinois and then back to Charles City.  He finished his working career with nearly five years at VanMark Equipment in Creston, Iowa.

Vern and Winnie retired in Charles City where they were active in the community.  He had many interests including gardening, hunting, fishing, fixing anything that needed fixing, woodworking, church choir, and Knights of Columbus.  Vern was awarded the Tobin Award in 1995 for his work with the Izaak Walton League.  In their retirement, he and Winnie also enjoyed visiting their children, grandchildren, family, and friends in North Carolina, Indiana, Wisconsin, Iowa, California, and Minnesota.

Traditions were very important to Vern.  In 1967, he and Winnie took their four children to Birch Lake in Minnesota to spend a week at a cabin.  They enjoyed fishing and playing games.  It became a yearly event that has continued to this day with their children, grandchildren, and great-grandchildren.

Welcoming Vern home into heaven are his parents and brother.

In lieu of flowers, memorial contributions can be made to the ALS Association Iowa Chapter or the Izaak Walton League in Charles City, Iowa.

Hauser Funeral Home, (641) 228-2323, in Charles City, is in charge of local arrangements.  Online condolences may be left for the family at www.hauserfh.com.