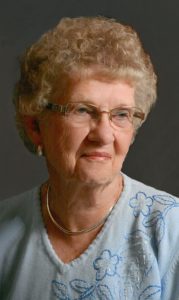 Visitation will be at Hauser Funeral Home from 4:00 to 6:30 p.m. Monday, February 25, 2019, with a Scripture Service beginning at 6:30 p.m. Visitation will continue one hour before the service at the church on Tuesday.

Cleo Mae Majewski, the daughter of James and Bernice (Meek) Majewski, was born on June 16, 1927 in rural Elma, Iowa. She graduated from Greene High School. After high school graduation, she went to Waterloo School of Cosmetology. Cleo was united in marriage to Martin Jones on November 14, 1946. She owned and operated NuMode Beauty Salon until Malinda was born. She then became a homemaker, mother, taxi driver, and nurse etc.… everything that that goes with being a housewife. She also worked 2 or 3 days a week as a cosmetologist. About 16 years later she took a job as a teacher aide, and later was the confidential secretary to the principal at the Charles City Jr. High School until retirement.

In her spare time she would dabble in ceramics, stained glass windows, sewing and of course a little of babysitting. Cleo once wrote “I haven’t become rich or famous but I have had a busy, full, and happy life”.

Living family members include her two daughters: Malinda (Doug) Welton of New Hampton and Tara Lane of Nashua; 8 grandchildren; and 13 great-grandchildren.
She was preceded in death by her parents; husband Martin on September 7, 2018; and grandson, James Welton.