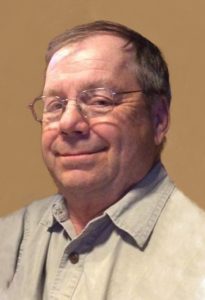 James “Jim” Balkenende, 76, of Charles City, passed away Sunday, February 17, 2019, at the University of Iowa Hospital in Iowa City.

James William Balkenende, the son of William and Christine (Weiss) Balkenende, was born on December 2, 1942 in Marble Rock, Iowa. He served in The United States Army. Jim was united in marriage to Nadine Johnson on April 19, 1969. To this union three sons were born: Michael, Richard, and Brian.

Jim worked for White Farm and DMC Manufacturing until his retirement. He enjoyed collecting baseball cards, coins, and stamps. After his retirement he sold his treasurers at various flea markets. Jim loved being outdoors where he liked fishing, hunting with his dog Ginger, camping with family and friends, and mushroom hunting. Jim spent his Saturdays watching the Hawkeyes and the Green Bay Packers on Sundays. Above anything, the joys of his life were his five grandchildren: Meadow, Tate, Clara, Addie, and Jacob. Jim’s favorite saying was “If I knew how much fun being a gampa was, I would’ve done it first.”

He was preceded in death by his parents; son, Michael; brother, Dick; brother-in-law, Jerry Dutcher; and beloved dog, Ginger.